King City, CA: Today started with some chili winds and overcast skies, a big change from the previous hot muggy days. Circus Imagination’s first show of the day was at NOON and it was a great way to warm up in this cold day! – Even more for whoever is wearing the costume of the fuzzy and warm gorilla…

The first circus featured Tina the Tight Rope Walker, lions, tigers and bears being tamed by a 4 year old trainer! One of the youngest and most talented we have ever seen! And we do see many Lion Tamers around that same age, sometimes they start taming lions as young as 3 years of age – both lions and trainers!

Our second show of the day was at 2 PM and Circus Imagination welcomed a very special guest that doesn’t travel with the circus that often. Chad the Strong Man, and his loyal companion Griffin the Clown. But something extraordinary happen, when it was time for the Strong Man to lift up his enormous weight, as the crowd was cheering, he just couldn’t do it! This was definitely not a good day for the Strong Man….Then out of the blue this little clown comes out and completely steals the spotlight by picking up the weight that the Strongman couldn’t and with such ease it seemed it was made of feathers!

Circus imagination also featured today two very special Champagne Sisters, miss Scout and miss Catheryn. You could say they are experienced circus performers by now, since they joined Circus Imagination last year at the Monterey County Fair! Thank you girls for sharing all your talent and laughs with us! And HAPPY BIRTHDAY 9 YEAR OLD Catheryn! Hope to see you girls later this year at Monterey again! 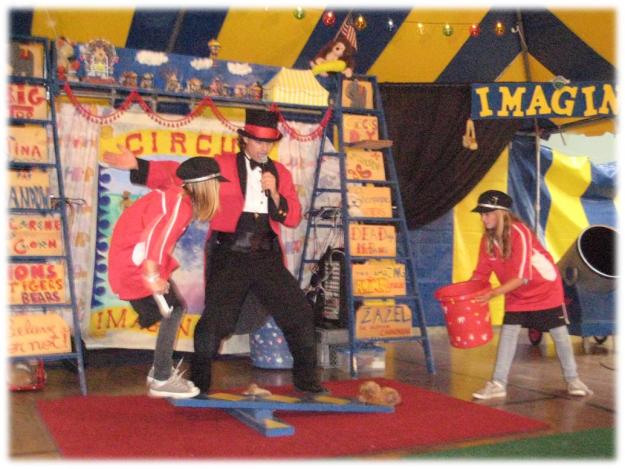 Our third show of the day happened at 4 PM and there was something unusual in the Butterfly Ballerinas act. Even though it is usual for unusual things to happen in our circus, this one we’ve never seen happen before! The Butterfly Ballerinas were dancing around, as usual, and when the Butterfly Collector Clown suddenly came to chase them, believe it or not he was wearing a tutu! Smart clown… dressed just like what he was trying to catch, almost made him disappear in between the girls. If only he didn’t have a big red nose sticking out maybe he could have fooled us!

Well this is it for today!

Weird fair food of the day: Ringmaster and Costumier Carolina tried something that you can say is both breakfast and desert, both fried and sweet, both bacon and chocolate! Yes… we did it, we had some chocolate covered bacon! And let us say that it is worth a try! Beyond doubt a taste we’ve never tasted before! And will never forget! And now it sits next in the list with frog legs and deep fried butter…

Wanna say something? Go ahead, write it down! Cancel reply