Yuba City, CA: Hello everybody! Circus Imagination had a wonderful time at the 2012 Yuba Sutter Fair! We loved being welcomed back and welcoming back to our circus all those wonderful children & teenagers that have been with us at this fair for so many years! Something like seven years I believe!

We would like to thank the fair for having us back and also all the enthusiasm from our audience and volunteers! You guys were the real stars! Don’t forget: Go home and have your own circus in your own backyard!

Here are some of the highlights of this week.

Yuba City, CA: Hello everybody! Circus Imagination discovered there’s a picture of our show on the wall at Applebees! It seems that when they decided to re-decorate the restaurant they borrowed some pictures from the Yuba Sutter Fair!
If you are ever around the area and wanna check it out the address is 1000 Tharp Road, Yuba City, CA 95993-2617.
That’s it for now folks!
See you later alligator!

Yuba, CA: Hello kids! Today was the last day of the 2011 Yuba Sutter Fair! Circus Imagination’s first show of the day was at 2 PM and we featured the beautiful Tina the Tight Rope Walker, Champagne Sisters from Paris, France and the amazing Dead Eye McBang the Cowboy performed by the courageous 5 year-old Tristan, from Yuba City – Check out his picture below!
Second show of the day was at 4 PM and the circus featured Tina the Tight Rope Walker, Wild Animal Trainer and his troop of crazy monkeys, giant elephants and hopping lions – see one of the ferocious lions graciously flying through the hoola-loop of fire o the picture below! Circus also had Calamity Oakley the Cowgirl, Dead Eye McBang the Cowboy and the amazing Human Cannon Ball!
Last show of the day, and the fair, was at 6 PM and we had a wonderful last circus with the presence of most of our full-time volunteers! Check out the picture of this show’s wild animals below!
Well this is it for us guys. Circus Imagination would like to thank the Yuba Sutter Fair for having us back here this year, and also all the volunteers that participated in our show – as well as all audience members – you are all awesome! Thanks for your enthusiasm and laughs!
We’ll hope to see you next year!
Remember kids, you can have your own Circus Imagination at home with a few props from around the house, friends and your imagination! 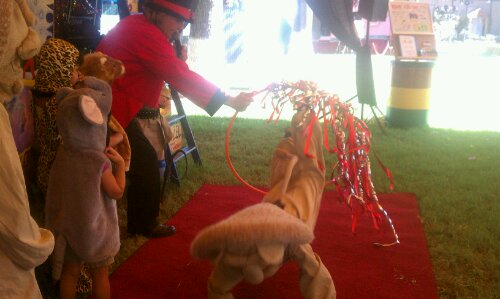 Yuba, CA: Hello world! Today the heat got the best out of everybody, it was so hot in the middle of the afternoon that we had people competing for a spot underneath the misters we have set up under the circus tent!
First two shows of the day were at 2 PM & 4 PM and they both featured Tina the Tight Rope Walker, the amazing Animal Trainer and his troop of ferocious aninals, Butterfly Ballerinas and Clarence the Clown and Calamity Oakley the Cowgirl! Two of our volunteers found this adorable new way to become butterflies: with balloon wings! Check out their picture below, don’t they look cute?
Our third and last show of the day was at 6 PM, the circus had Tina the Tight Rope Walker, Marquina the Lion Tamer, wild animals, the tricky Cowgirl of the old West and the very talented 13 year-old Tiffany & 9 year-old Sarah from Browns Valley, CA in the part of the circus acrobats Champagne Sisters – Check them out on the picture below!
Well that’s it for today folks, see you tomorrow at the last day of the 2011 Yuba Sutter Fair! 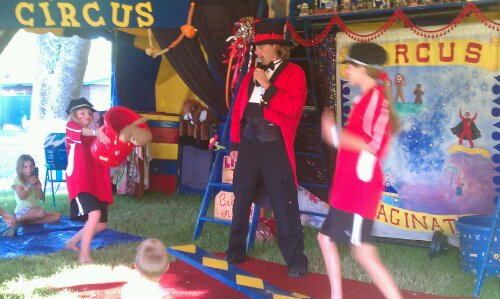 Yuba, Ca: Hello everybody! Circus Imagination made the front page of the Appeal-Democrat! Read the story below or click on the newspaper logo to see it on their website!

Lillian Baker, 8, left, of Tierra Buena, prepares to walk the tightrope while being introduced by ringmaster Caton Raintree-Hegwer during a Circus Imagination performance at the Yuba-Sutter Fair in Yuba City on Thursday. 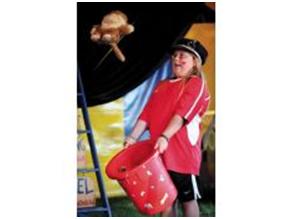 Kelly Hurlbert, 7, of Live Oak, reacts while catching a flying monkey during a Circus Imagination performance at the Yuba-Sutter Fair in Yuba City on Thursday.

Children are the entertainment at the fair

They never expected to be part of the show.

A dozen Yuba-Sutter children did not have the slightest idea their night at the fair would cast them into roles of lion tamer, tightrope walker and human cannonball, but there they were, jumping through rings of fire and launching monkeys into the air. It was just another routine performance of midway show Circus Imagination, but a stage debut for most of the kids.

“I’ve been to the circus, but I’ve never been in one before,” said 7-year-old Kelly Hulbert. “It was really funny.”

In the role of one of two Champagne Sisters, the Live Oak resident giggled Thursday as she held out a bucket to catch stuffed primates catapulted skyward by her companion and said she likes using her imagination.

Ringmaster Caton Raintree-Hegwer said his goal is to bring old-fashioned fun back to the fair.

“We love using kids as stars rather than props,” he said. “A lot of entertainment is, ‘Sit. Be. Watch. Be Entertained.’ Here, they are the entertainment.”

As other children rode the rides, played games and wandered the midway, these children were envisioning themselves playing with elephants, shooting out of cannons or as becoming ballerina monkeys. Parents, friends and family members were unrestrained in oohing and aahing and offering up thunderous applause.

“This kid has the best imagination,” said Tierra Buena resident Teya Baker, whose daughter jumped enthusiastically into her role as Tina the Tightrope Walker, reaching her arms high above her head one after another as she pretended to climb a 100-foot ladder.

“I add new things to my imagination a lot,” said Lillian Baker, 8. “I think I want to do this at home. I could use my dog as a dingo.”

As a member of Franklin 4-H, Lillian has spent all week at the fair showing her pygmy goat, chicken, dog and rabbit. But in the her three days left, she might consider a return to Circus Imagination to try her hand as Calamity Oakley Cowgirl or Marco the Lion Tamer since she had so much fun picturing herself tottering across a tightrope.

“I was just laughing,” she said.

In a society where children are so inundated with technology, they seldom take time to play outside or embrace their creativity, Raintree-Hegwer said. So he loves seeing his circus unlock the treasure chest of imagination buried inside their minds.

“I have so many kids come back the next day and say, ‘I told all my friends that I was a human cannonball at the fair,'” he said. “Where else can you do that?”

Yuba City resident Charlie Robinson, 8, loved his role as a lion, baring his claws, playing dead and jumping through a flaming hoop, even if it was only made of rustling red and silver tinsel.

“You can use your imagination to do anything,” he said. “It’s better than playing video games or watching TV or playing on your iPhone.”

Circus Imagination holds numerous free shows throughout the day and can be found between the Flower House and the Food Court.

Yuba, CA: Hello everybody! Today Circus Imagination had 3 shows at the 2011 Yuba County Fair! The first one was at 2 PM and featured Tina the Tight Rope Walker, Wild Animal Traine and her troop of ferocious animals, the beautiful Butterfly Ballerinas, the amazing cowgirl and Zazel the unbelievable Human Cannon Ball – Check her picture below! The second and third shows of today were at 4 PM & 6 PM and were both wonderfully full of excited new volunteers and even more enthusiastic “repeaters”.
The fair theme this year is “Dance to the moo-sic!” So today the fair hosted a cow costume contest and Circus Imagination “sponsored” one of our all-the-time volunteers to be in it! Her name is Ajulene, she’s 5 years old and she has been EVERY part in the circus that the costume fits her! We had a wonderful time at the contest and got 3rd place! Check out her picture below!
We’ll see you tomorrow at the fair at 2 PM, 4 PM & 6 PM! 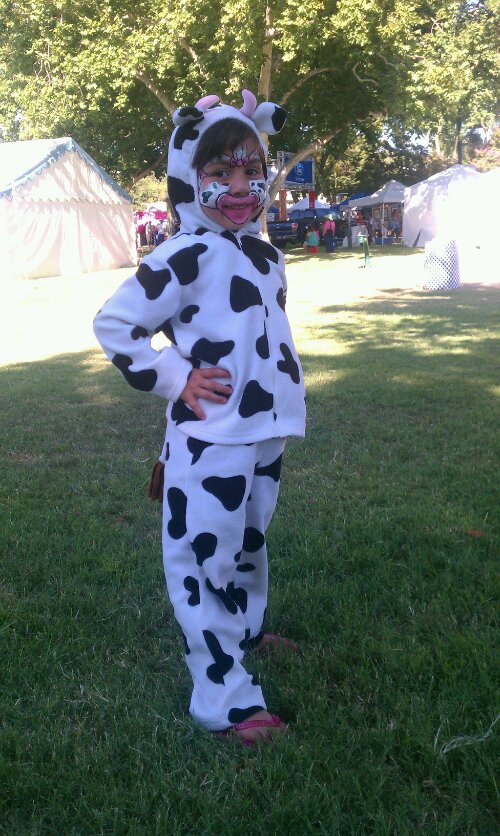 Yuba City, CA: Hello everybody! Today was opening day for the 2011 Yuba Sutter Fair and Circus Imagination had 2 shows!
First show of the day was at 6:30 PM and we featured the performance of 7 year-old Gaby from Yuba City, CA as the beautiful Tina the Tight Rope Walker – check out her picture below. Circus also had the daring Marquina the Lion Tamer and her troop of ferocious lions, monkeys and semi-trained elephants! Finishing up with the talented Calamity Oakley the Cowgirl!
The second show of the day had the adorable participation of talented 9 year-old Amelia, from Yuba City, Ca as a double-performer: She was Tina the Tight Rope Walker and also Clarissa the butterfly collecting clown! Check out her picture below! (If you see the similarities between her and Tina from the first show it’s not your imagination, they’re sisters!) The circus also featured the adorable Butterfly Ballerinas, a cowgirl and the Champagne Sisters, from Paris, France.
We’ll be back tomorrow, same show times, at the 2011 Yuba Sutter Fair!